This Land is Your Land, This Land is VICELAND: New Specialty Channel Launches with Distinctive Slate of Programming, Feb. 29 TORONTO, Feb. 16, 2016 /CNW/ – Welcome to VICELAND. Featuring hundreds of hours of original and engaging content developed and produced by the creative minds that are the heart and soul of VICE, new premium specialty channel VICELAND launches Monday, Feb. 29 at 5 a.m. ET/PT with a nationwide three-month free preview.

The full list of television service providers offering VICELAND as a free preview to their subscribers can be found here.

Additionally, viewers can watch anywhere, anytime on mobile and tablet web, and desktop devices by visiting VICELAND.com, brought to you by Fido. Additional details on how viewers can access VICELAND content will be announced in the coming weeks.

“VICELAND is the definition of destination viewing and we couldn’t be more excited to bring our viewers this incredible slate of fresh, premium programming unlike anything seen before on a linear channel,” said Colette Watson, Vice President, Broadcast and TV Operations, Rogers. “VICELAND is another example of our commitment to expand our offerings to bring Canadians the best in original programming, and they won’t be disappointed.”

“VICELAND is an extension of VICE’s mission as a whole. To borrow from our long-time partner, Spike Jonze – we want to examine the world we live in, and explore the things that confuse us, make us curious, make us laugh, or awaken our sense of wonder. We can confidently say that our programming accomplishes this mission,” Michael Kronish, Executive Vice President, Television, VICE Canada.

See below for full details on VICELAND‘s prime-time schedule.

Additional premiere dates, including Canadian original series Abandoned, Cyberwar, Dead Set on Life, and Terror, as well as Black Market with Michael K. Williams, Huang’s World, King of the Road, States of Undress, and VICE World of Sports to be announced at a later date.

NOISEY: Tuesdays at 10 p.m. ET/PT (check local listings), beginning March 1
Created by VICE executive producer Andy Capper, NOISEY is the most original music documentary series on TV today. Hosted by Zach Goldbaum, this one-hour series takes a first-hand look at the most interesting music scenes around the world. From Compton to Las Vegas, London to São Paolo, NOISEY closely follows the artists defining music today while reflecting on and reacting to the socio-­political issues within the cultures that produce them.

Weediquette: Tuesdays at 11 p.m. ET/PT (check local listings), beginning March 1
In a weed show like no other, VICE correspondent Krishna Andavolu chronicles the science, culture, and economics of the emerging “green” economy. Each one-hour episode explores the impact of marijuana legalization across the United States and internationally, examining how people on all sides of this issue are dealing with the growing popularity and acceptance of this remarkable plant. There are many players in this weed revolution, and each one has a story to tell.

Gaycation: Wednesdays at 10 p.m. ET/PT (check local listings), beginning March 2
In this one-hour series, Canadian Ellen Page and her best friend, Ian Daniel, set off on a personal journey to explore LGBTQ cultures around the world. From Japan to Brazil, and Jamaica to here in North America, Page and Daniel discover the multiplicity of LGBTQ experiences, meet amazing people, and hear their deeply moving stories of struggle and triumph.

Balls Deep: Wednesdays at 11 p.m. ET/PT (check local listings), beginning March 2
There are more than seven billion lives happening on Earth right now – not all of them great, but most pretty interesting. In each half-hour episode, Thomas Morton attempts to find out what humanity’s deal is by hanging out with different groups of people to give their lives a try. Think of it as a foreign-exchange program, but for subcultures instead of countries – and with only one student.

F*ck, That’s Delicious: Thursdays at 10 p.m. ET/PT (check local listings), beginning March 3
F*ck, That’s Delicious chronicles the life and eating habits of rap’s greatest bon vivant, Action Bronson. In each half-hour episode, Action – along with the help of his long-­time friends and collaborators Meyhem Lauren and Big Body Bes – shows us that life is meant to be enjoyed as much as possible.

VICE Guide to Film: Saturday, March 4 and Sunday, March 5 at 6 p.m. ET/PT (check local listings)
**Canadian Original Series**
VICE Guide to Film is the ultimate guide to cinema through the eyes of some of the most innovative and influential film figures in the world. The 24-part, half-hour documentary series caters to the style of the filmmaker profiled in each episode, and features interviews with experts and critics, ‘supercuts’ of devices, and archival footage of films. VICE Guide to Film is an engaging, cinematic series that will entertain and educate even the most intense film fans on the world of cinema.

About Rogers
Rogers Communications is a leading diversified public Canadian communications and media company. We are Canada’s largest provider of wireless communications services and one of Canada’s leading providers of cable television, high-speed Internet and telephony services to consumers and businesses. Through Rogers Media, we are engaged in radio and television broadcasting, televised shopping, magazines and trade publications, sports entertainment, and digital media. Our stock is publicly traded on the Toronto Stock Exchange (TSX: RCI.A and RCI.B) and on the New York Stock Exchange (NYSE: RCI). For further information about the Rogers group of companies, please visit Rogers.com. 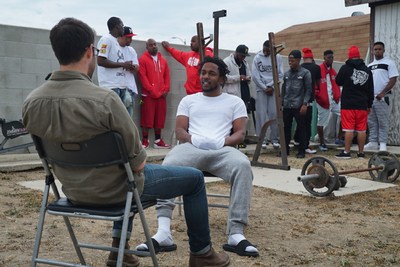